It would be an understatement to say I was happy when I first heard that I’d be spending time in a forest and wildlife sanctuary in Eastern Cambodia. The thought of settling down after six months of living the nomadic life of a traveler felt like a blessing. But to then find out I would be working with animals in a lush, protected jungle corridor seemed like a dream. Originally invited to lead treks, spend time with elephants and share my knowledge about the region, I couldn’t wait to start. The only problem is that I had never even heard of the Mondulkiri Province.

In my defence, “going with the flow” is the way I choose to travel. In mid-June 2015, I left my home in Vancouver, Canada with the goal of feeling lost and disoriented anywhere that would take me. Sitting in the roughly velveted airplane seat in direction to France, I realized that all I had planned for my open-ended trip was to eventually fly from somewhere in Europe to somewhere in Southeast Asia. With my black 45L backpack to keep me company I traveled through central Europe, with a detour to Morocco. Following the sunshine, I flew from Budapest to Bali in mid-October, where I first met Ben (my partner in crime at the sanctuary).

I first met Ben in a cheap seedy hostel planted in the touristy area near the Balinese airport in Kuta. Despite both being open minded to different types of places and scenery, we bonded over how ugly Kuta was – mostly due to an overload of tourism. We traveled together for a few weeks exploring, getting lost and snorkeling. After parting ways, we realized that we would both be in Cambodia around the same time, so we agreed to meet up in order to watch the newest Star Wars. Before any of these plans unfolded, Ben informed me about the job he’d found and how I could be involved. With little detail about what I was getting myself into, I blindly set sail for Sen Monorom from Bangkok in mid-December.

Since then, I have not only become accustomed to life here, but it now feels like home. To be able to trek through jungle in the morning, spend time with animals in the afternoon, play football with local friends in the evening and make music around a campfire at night is not a bad life. Contributing to the project has been fun thanks to the variety of work I have had the chance of doing including leading treks in English and French, putting my Communications degree to good use by helping with marketing and writing, to organizing volunteers, to cooking the traditional Bunong way in a bamboo over the fire. Whatever task I may be doing, it’s motivating to know I have control within the sanctuary plans. Considering how blindly I arrived to this little oasis, I may just keep “going with the flow” for a long time. 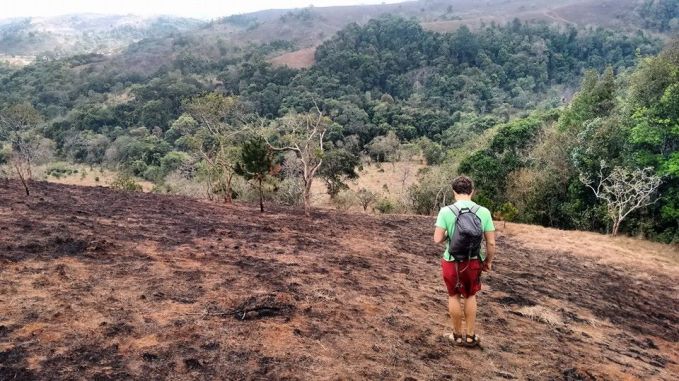 One thought on “Noah: My Journey To Mondulkiri”